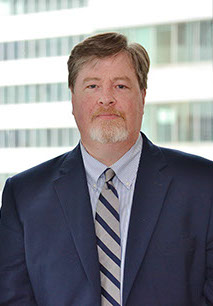 Patrick J. Gibbons, Esquire graduated from the University of Scranton in 1988 with a double major B.A./B.S. in History and Political Science, earning membership in the National Honor Societies for both History and Political Science. Mr. Gibbons received his J.D. from the Dickinson School of Law of the Pennsylvania State University in 1991. He is the author of chapters in "Crashworthiness: Theories and Causes of Action", published by the Pennsylvania Bar Institute.

Mr. Gibbons concentrates his arbitration and trial practice in the area of insurance casualty litigation, representing several major national insurers, self­-insureds, and third-party administrators. He has presented industry lectures on several insurance-related issues, such as bad faith, uninsured and under-insured motorist claims, and verbal threshold or limited tort concepts under New Jersey and Pennsylvania law. He has also served as a panel member at several Pennsylvania Bar Institute Continuing Legal Education seminars on various topics, including evidence issues, selection of expert witnesses, and civil procedure. He also has an active appellate practice, preparing briefs and participating in oral argument before the Pennsylvania appellate courts. Mr. Gibbons is experienced in product liability, motor vehicle, and premises liability litigation. He is a member of the Association of Defense Trial Attorneys, a national organization of defense casualty litigators. His trial experience includes cases throughout the state, federal and administrative courts in Pennsylvania. He is admitted to practice before the United States Supreme Court and is a member of the bar of the Commonwealth of Pennsylvania, Montgomery County (PA), United States Third Circuit Court of Appeals, and the United States District Courts for the Eastern District of Pennsylvania and Middle District. Mr. Gibbons is the Chair of the Montgomery County Bar Association Insurance Committee and a member of the Bench-Bar, Trial Lawyers and the Judiciary Committees. He operates his practice from a suburban satellite office in Norristown, Montgomery County, PA and has an active civil trial practice throughout the Eastern half of Pennsylvania. He has extensive trial experience and has successfully tried cases to verdict in multiple venues throughout Pennsylvania.

Mr. Gibbons is also an Adjunct Professor at The Drexel University School Of Law, currently teaching Interview, Counseling and Negotiation.